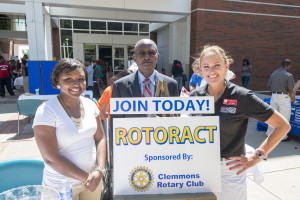 Rotaract brings together people ages 18-30 in universities and communities worldwide to organize service activities, develop leadership and professional skills, and have fun. Rotary clubs sponsor them, but Rotaract members manage and fund their clubs independently. Rotaract members work closely with their local Rotary club, and may join after their Rotaract membership ends.

Miss Blackwell, a pre-physical therapy major at WSSU, is the first student to join the club and was very active in student solicitation during the fair. She has volunteered in the past with Habitat for Humanity and Feeding the Children organizations. Interest forms were completed by 15 students that day, who will be contacted soon regarding an initial club interest meeting, officer elections, and planning future club service activities.

Dr. Migliarese will serve as the club’s on-campus advisor and Dr. Horne will serve as the off-campus advisor. The officers from the Salem College Rotaract Club have also offered to help with establishing the WSSU club and are planning to meet with the WSSU club officers when elected. The Rotary motto, “Service Above Self” mirrors the WSSU motto, “Enter to Learn. Depart to Serve”, thus, the club will have a bright future reaching out into the East Winston community and beyond.